See the Omega2 LTE Guide for details on getting started and using your new Omega2 LTE to build cellular IoT projects!

The Omega2 LTE enables uses cases that are not limited by the range of Wi-Fi networks since the 4G LTE data connection provides internet connectivity as long as there is cellular signal.

To offer flexibility in choosing antennas, the Omega2 LTE features u.FL antenna connectors for connecting two LTE antennas and a GNSS antenna. The Omega2 LTE needs these antennas to connect to cellular networks and GNSS satellites.

Getting up and running is easy! Use the commandline to configure and enable the LTE data connection:

The Omega2 LTE supports all of the common positioning systems:

This further extends the possible use cases to include real-time asset and fleet tracking. Combined with the LTE data connection, its easy to build applications that report geoposition, an accurate timestamp, and other data to remote servers.

Enabling GNSS and reading the data can be done in just two commands:

Since we started making IoT hardware in 2015, we’ve taken great care to listen to feedback from our community of developers, hackers, and makers to learn what they really need from their IoT devices, and make sure that feedback drives our product decisions.

The Omega2 LTE is flexible when it comes to power sources: it can be powered by LiPo batteries or USB power. An on-board battery management chip enables the use of LiPo batteries as the main power source, and will recharge the batteries when connected to USB power. Use a battery to make your project portable, or to act as a back-up power supply.

The on-board USB-to-serial chip provides reliable, always-on access to the Omega’s commandline, which is invaluable for configuration and debugging device operation. Alternatively, securely connect to the commandline through the local network using SSH.

Use MicroSD card slot on the bottom of the device to add gigabytes and gigabytes of additional storage to your Omega2 LTE. The ability to add storage space is essential for storing any assets created by the device – log files, images, etc – or, occasionally, when project requirements change leading to the application taking up more space than originally planned.

The Omega2 LTE uses a series of LEDs to provide visual feedback on the current status of the device. 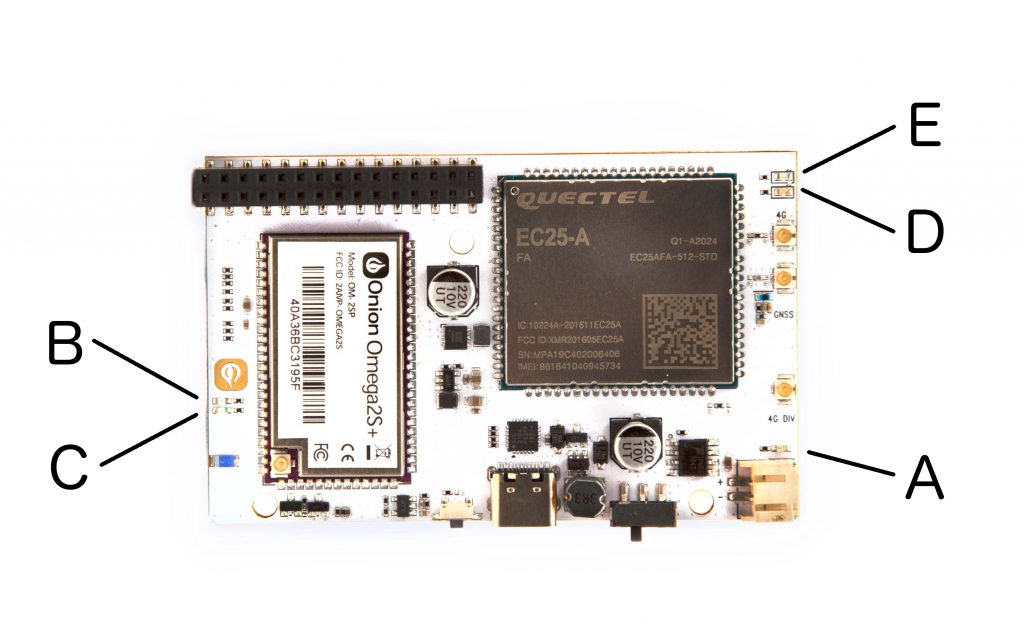 With extensive I/O, it is easy to interface the Omega2 LTE with other devices and components depending on the needs of your application.

The Omega2 LTE is compatible with the entire ecosystem of Omega2 Expansions!