The Onion Omega2 Linux Compute Modules are designed for applications that require drop-in connectivity and computing. The 42.9×26.4×9.9 mm package features a CPU, memory, flash storage, and a WiFi radio. It runs a Linux Operating System and is FCC certified, making it a small but powerful solution for IoT devices. 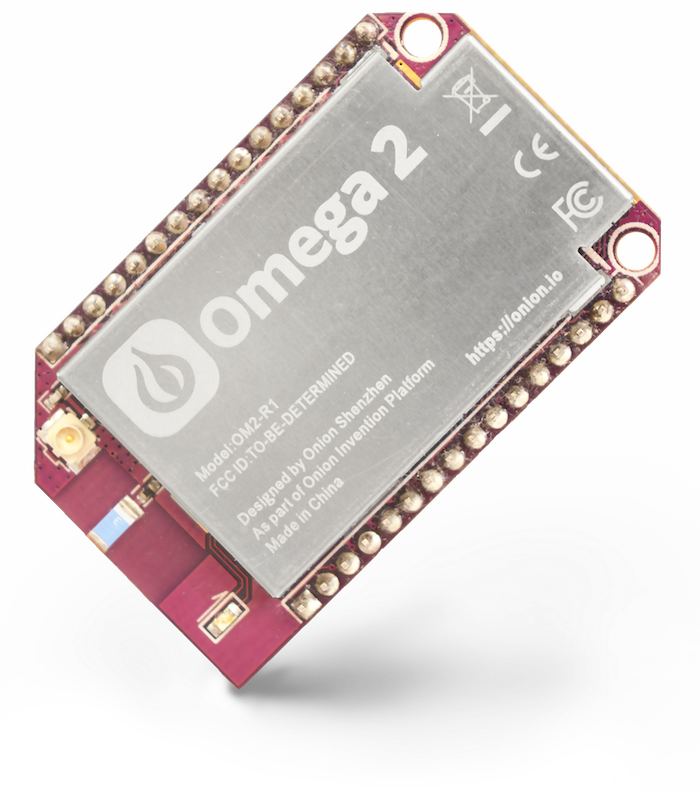 Overview
Variants
Specifications
Documentation & resources
Overview
The Omega2 modules are Onion’s Linux-based WiFi development boards designed to provide drop-in computing and connectivity functionality for IoT devices and applications. The Omega2 modules are self-contained: the processor, memory, storage, and a WiFi radio + antenna are all built-in. All that’s needed is a 3.3V power source and the customizable OpenWRT Linux OS will boot and enable start running your business logic. With it’s tiny form factor, built-in Linux and WiFi, FCC and CE certification, it is an ideal solution for quickly building production-ready prototypes and smaller-scale production of connected devices.

At the Omega2’s core is the MT7688 SoC that features a 580 MHz MIPS CPU, supports 2.4 GHz IEEE 802.11 b/g/n WiFi as well as 10M/100M wired ethernet network connectivity, and operates at 3.3V. The Omega2 modules come in two variants: the Omega2 and Omega2+. The amount of built-in flash storage and DDR2 RAM memory depends on the module variant. On the Omega2+ variant, storage space is expandable using the MicroSD card slot on the underside. The Omega was built to interact with other hardware, so it has a wide variety of hardware interfaces. It features 32 pins at a 2mm pitch. Up to 18 pins can be used as user controllable GPIOs, and there is support for several hardware-based serial communication protocols: There are dedicated pins for: The on-board WiFi chip antenna makes the Omega2 ready for WiFi networking right out of the box. It also features a u.FL connector for applications that require more powerful or specialized antennas. A key highlight of the Omega2 family: it’s tiny! Measuring 42.9×26.4×9.9 mm, it takes up minimal space in a solution while providing impressive functionality for it’s size.

The Omega2 runs an Onion-customized version of OpenWRT Linux, based on the modern 4.14 Linux kernel. Users can rely on the Linux system to abstract away complexity in device operation and on the networking and cryptography stack to simplify connectivity. The OS is open-source and available on GitHub, allowing users to customize it to meet their individual needs. By virtue of the Linux OS, developers are not limited in their choice of programming language. Supported programming languages include: The OS also comes equipped as a web server by default, so that users and other devices on the local network can interact with the Omega through a browser.

What makes it a good platform?

It’s a combination of the following: The Omega2 modules are powerful and flexible enough to be the central module of any IoT device.
Variants

For surface mount version of the Omega2 check out Omega2S
Specifications 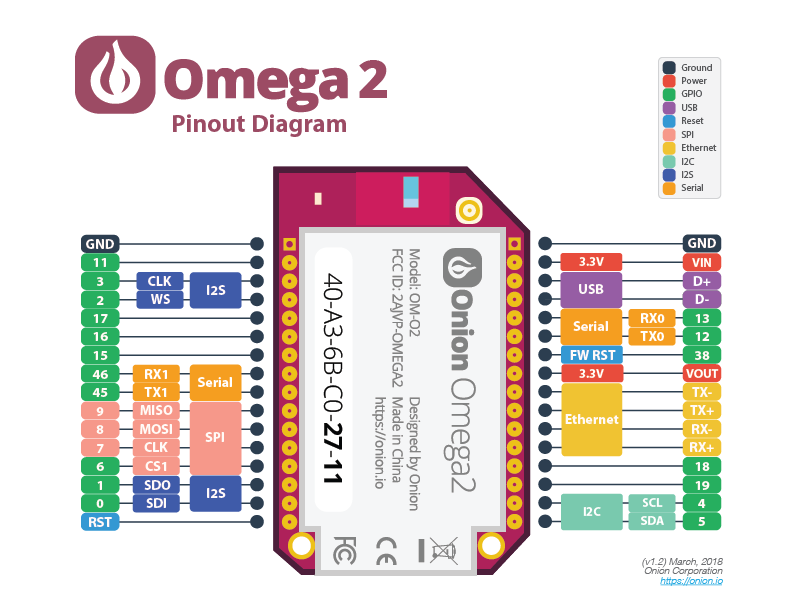