In the last week of the year, we’ll continue our series on the Arduino Dock2 as a co-processor for the Omega2. This time, we’ll have the microcontroller reading a potentiometer and sending it the Omega over the UART. The Omega will host a web page that will show the potentiometer value being updated in almost real-time!

Like last week, we’ll be using MQTT on the Omega to update a running Python program with the latest readings from the microcontroller. On top of that, we’ll add a web-server to the Python code with GET endpoints to display a web page and grab the latest potentiometer reading.

Sounding a little complex? No worries, we’ll guide you through each of the steps in detail.

So, let us break down this into chunks and dive in!

To be more specific about the system: the microcontroller reads the potentiometer value and continuously transmits the reading via serial to the Omega. The Omega will be configured to automatically publishes the readings from the UART to an MQTT topic. It also runs a Python program that listens to the MQTT topic for the potentiometer readings and simultaneously hosts an HTTP server. The HTTP server has a few GET endpoints to host a web page that dynamically shows the current position of the potentiometer. 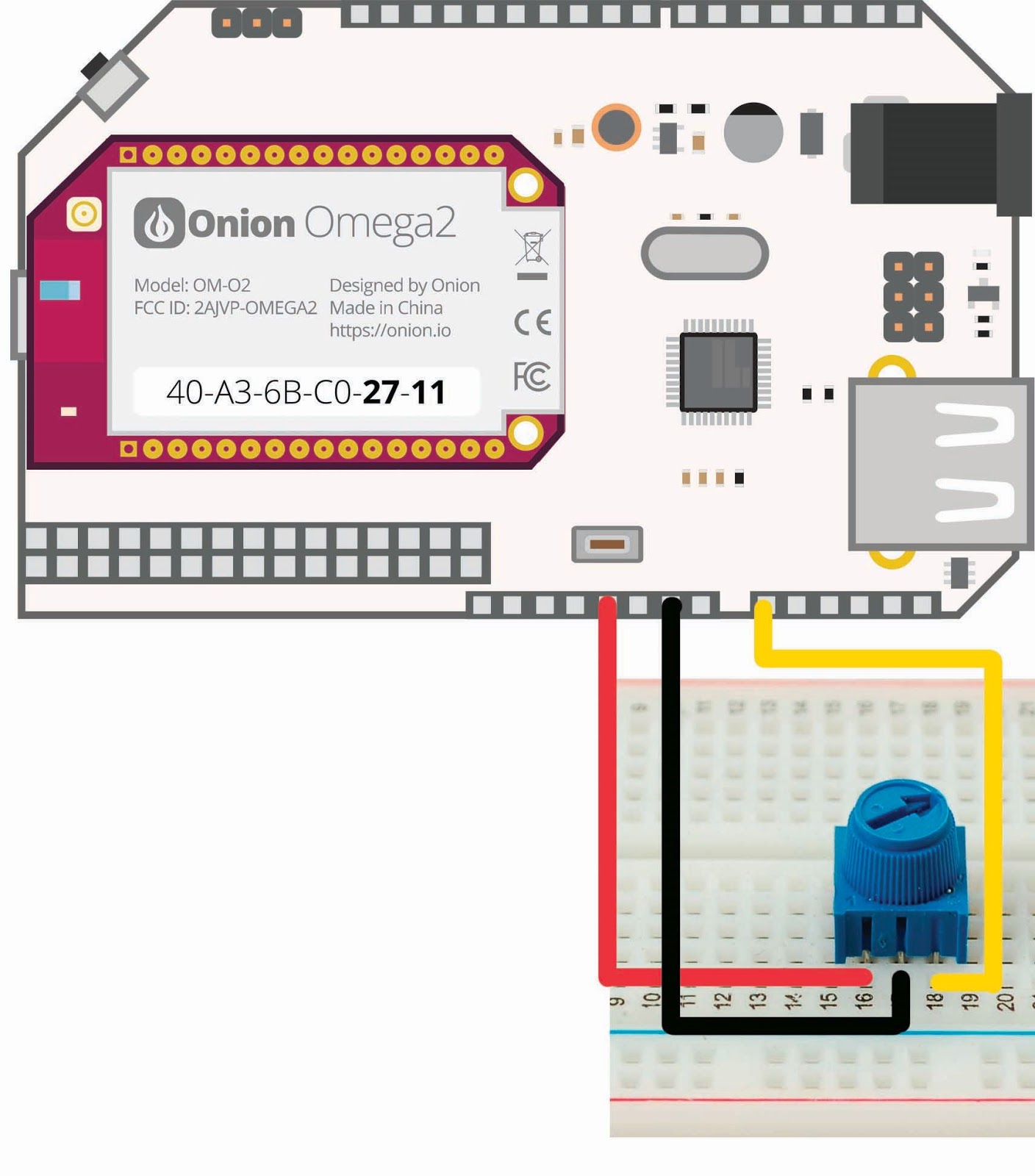 All of the code for this week’s tip is available on Github. Take a look at our article on using GitHub for details, but if you’ve followed the instructions above, you can run the following to clone the code to your root directory:

It’s pretty straightforward, isn’t it? We have a function that reads the potentiometer value and sends this to the Omega through the UART. The next step is to flash this sketch to the Arduino Dock 2; please refer to our guide on how to flash the Arduino Dock wirelessly.

MQTT on the Omega

Now, let’s take a look at the Omega portion. We’ll need to ensure all the data received on UART1 gets published to an MQTT topic. This is very similar to what we did last week, we’re just going to change the topic name to potentiometerPosition just to be accurate:

This will pipe all output from UART1 to the potentiometerPosition MQTT topic. The & at the end will ensure this command runs in the background, so you’ll need to launch it before the rest on the code on the Omega.

Python on the Omega

We’ll be extending the Python program we wrote last week to host a web page as well. We’ll do this by writing code to host a web server with a few endpoints for HTTP GET requests:

To make this happen in the code, we first setup a TCPServer on port 8080, and assigning the PotentiometerHTTPHandler class as the request handler class for the server.

The PotentiometerHTTPHandler class is an extension of the existing SimpleHTTPServer class. This allows us to simply write a do_GET()function, and the code in that function that will execute whenever the server receives an HTTP GET request. Inside our implementation ofdo_GET(), we define different actions to be taken based on the URL (path) of the request:

If the path is <Omega address>:8080/position, the do_GET function will create an HTTP response that holds the current position of the potentiometer as a JSON object. Alternatively, if the path is just / as in just the <Omega address>:8080/, the do_GET function will respond with the index.html file that’s located in the same directory (more on this later). The HTML file makes use of two Javascript libraries, it will ask the server (the Omega) to provide these, so for any requests with a path that ends with .js, the do_GET function will attempt to respond with the requested Javascript file from the same directory. We’ll need to be very careful to ensure our HTML file only asks for JS files that our Omega already has!

HTML on the Omega

So we previously mentioned that HTTP requests to the Omega on port 8080 will yield a web page. Let’s take a look at that index.html code – also available on GitHub:

On the HTML side, it uses a jQuery Knob to create and style a visual representation of the potentiometer value. It also contains some Javascript code, the first part configures the jQuery knob and the second part is where the magic happens, let’s take a closer look:

The code above will ensure that the function defined in the first argument of the setInvterval function will be executed every 100ms, or 10 times a second. The code that’s being executed will issue an HTTP GET request to the endpoint /position on the same server, and will then update the jQuery Knob with the value. Basically, the GET request is issued 10 times a second in order to obtain almost real-time potentiometer data from the Omega, and display it nicely.

Putting it All Together

And now you’re all set! It’s time to go ahead and start publishing the microcontroller data to our MQTT server, host the HTTP server and host the web page to monitor the current position of the potentiometer. For that, just run the following commands:

Now go to your browser and punch in http://omega-XXXX.local:8080/, where XXXX are the last four digits in your Omega’s MAC address. Your browser should show the following:

If you’re curious about the /position endpoint, in your browser you can punch in : http://omega-XXXX.local:8080/position you will just see a white screen with the potentiometer value in JSON:

So, let’s cover what we’ve learned this week:

Now it’s your turn to use this and make some creative projects on your time off. If you make something wicked based on this tip and tweet it to @OnionIoT, we’ll feature it here and you’ll get our 2BT featured project prize of a FREE Omega2+, a Dock of your choice, AND free shipping!