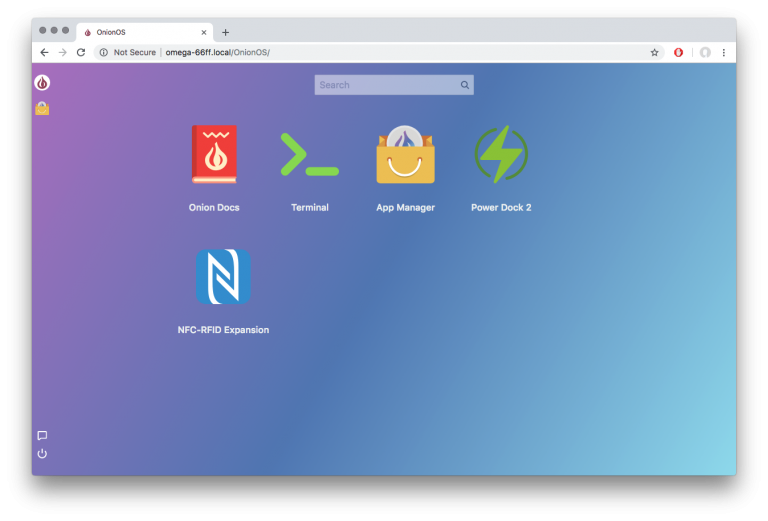 We have some exciting news to share with you: there is a new major release firmware available for the Omega2 family with a whole slew of improvements, the most important being that it comes bundled with OnionOS! For those who are not yet familiar with OnionOS, it is a web-based, graphical user interface for the Omega2 family, with a number of apps that can be used to configure and control your device. 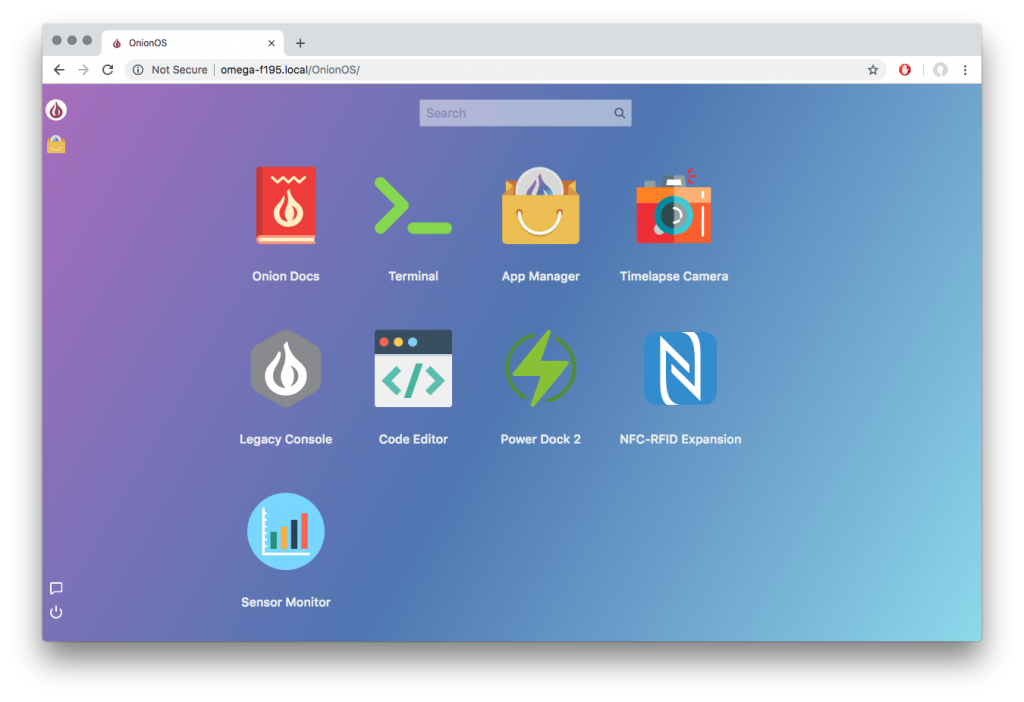 OnionOS is hosted on your Omega and can be accessed by pointing a browser to your Omega’s webpage at: http://Omega-XXXX.local/ where the XXXX are the last four digits from your Omega’s sticker. Just remember that you’ll need to be on the same network as your Omega to access the OnionOS.

This new release, v0.2.1 b198, is chock full of new features and improvements, and we can’t wait to tell you about them, keep reading to find out more!

A lot has changed since the previous major release, v0.1.10 b160, here is a small overview:

For those of you who have been using OnionOS, here is a small overview of what’s new with OnionOS:

Let’s dive into the details, shall we?

The Setup Wizard is a graphical, browser-based way of connecting your Omega to WiFi and then upgrading the firmware if it is not already on the latest available stable release.

Connect to your Omega’s WiFi Access Point, use your browser to navigate to http://Omega-XXXX.local/ (where the XXXX are the last four digits from the your Omega’s sticker) and, if your Omega has not yet been configured, the Setup Wizard will appear: 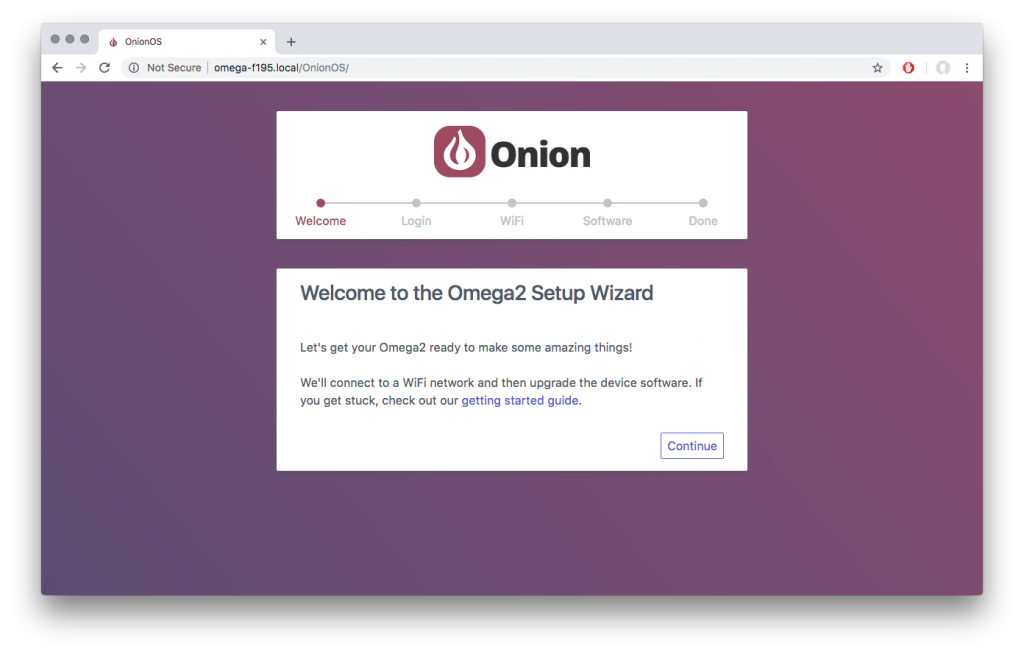 Once the Setup Wizard has been completed, your Omega will remember that it has been configured and will instead load OnionOS!

The App Manager is another new addition to OnionOS. With the App Manager, users can now install and remove OnionOS Apps with a few clicks, no more command line required. 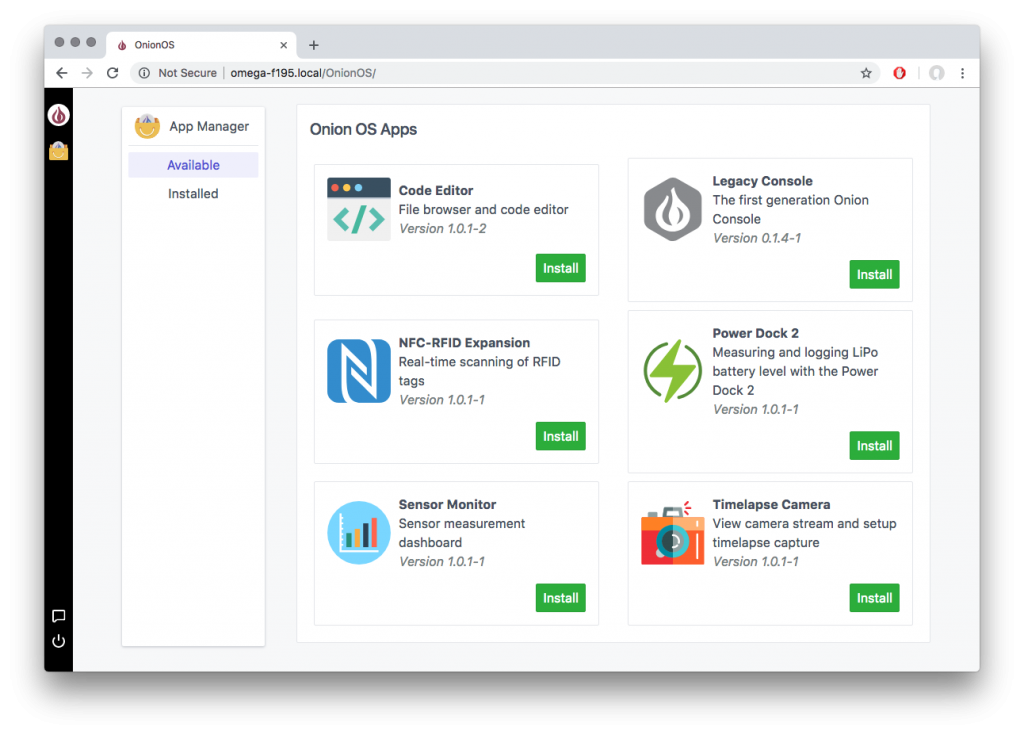 Clicking the Install button beside an App will start the installation process, you’ll see a loading icon in the button. When the loading icon stops spinning, the App will be installed. Click the Onion logo at the top of the sidebar to return to the main page and you’ll see the new App. Installed Apps will have a Remove button instead, that can be used to uninstall the App.

The App Manager checks the online Onion package repositories for OnionOS Apps, so as soon as a new App is released, it will show up in the App Manager.

If you’re wondering which Apps you should try first, we recommend the Code Editor. The Code Editor and Terminal Apps make OnionOS a great development environment for the Omega. Check out this short video for a quick guide on using the Code Editor

To our long-time users who still regularly use the Console (the predecessor of OnionOS), worry not, the Console is still available. It can be installed with the App Manager and then accessed through the Legacy Console app in OnionOS or by pointing your browser to http://Omega-XXXX.local/console, where the XXXX are the last four digits from the your Omega’s sticker.

How to Install All these Goodies

To install this latest and greatest firmware on your Omega, run the following command:

Once your Omega has completed the update, you’ll need to make some final updates to OnionOS, run the following:

Then you’ll be ready to go, point your browser to http://Omega-XXXX.local/ (where the XXXX are the last four digits from the your Omega’s sticker) and have fun with OnionOS! For best results, use the Google Chrome browser.

Since the WiFi driver is 100% new, if you’re upgrading from firmware v0.1.10 b160 or earlier, you may have to go through some extra steps to configure your Omega to play nicely with the new driver.

First, you’ll need to reset the wifi and networking configuration by running:

And then you’ll need to configure which WiFi networks you would like your Omega to connect to. This can be accomplished with the Setup Wizard or by running wifisetup on the command line.

We would love to hear what you think about the new stable firmware, OnionOS, and the new Setup Wizard! Please let us know if you find any odd behavior, are experiencing issues, or want to give us some feedback by posting on the Onion Community or tweeting @OnionIoT.

We want to make the Omega into a truly amazing product and we can’t do that without your help, so don’t hesitate to get in touch!