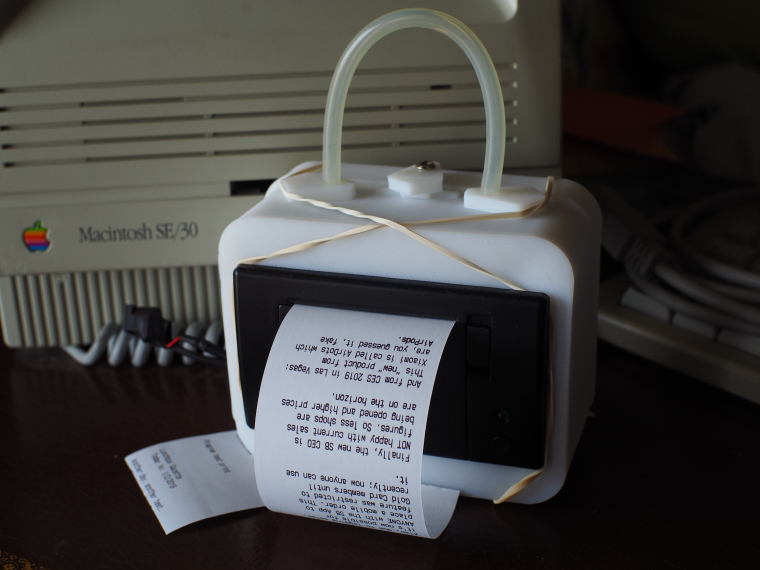 We’ve got a great project to share with you this week – it’s an excellent example of upgrading an existing project by making it WiFi-enabled.  Let’s dive in!

For years, Onion community user Dave P has been using an Arduino microcontroller and a thermal printer to print out a small gazette that he would put in his daughters’ lunchboxes every day. Super heartwarming! However, Dave’s biggest pain-point with this setup was having to re-program the Arduino every day, updating only the text that needed to be printed for that day’s edition of the gazette.

After seeing the IoT Thermal Printer project in the Omega2 Project Book, Dave rolled up his sleeves and modernized his lunchbox gazette printing press. The first step was to adapt Sparkfun’s thermal printer Arduino code to print messages received over UART and flash it to an Arduino Dock 2. The goal of modernizing the printer was to be able to write and print the messages easily – so Dave re-used the web-based printing interface from the project book, allowing him to use a browser to write and print the gazette. Finally, with a little bit of wire splicing and careful soldering, he managed to power both the Omega2 and the thermal printer from a single DC power supply and enclose the project in a 3D printed case that can easily be opened for servicing.

Now, printing the daily gazettes is as simple to navigating to a URL hosted by the Omega, typing out the message, and hitting Print!

Great work Dave, we loved your problem-solving skills and the thoughtfulness of the daily gazette, hats off! See the community post for all of the details on building your own gazette printer!

Don’t miss your chance to save up to 40%

HI EVERYONE! Welcome to the 52nd edition of 2-Bullet Tuesday! It's been a whole year since we've started…