Playing I2S Audio on the Omega2

We have some more exciting news this week: the very latest release of the Omega OS has support for I2S audio devices! For this week’s tip, we’ll show you how to install the latest release and play some tunes with your Omega using an I2S amp IC and a small speaker.

We’ll guide you through the installation process and the hardware setup. Then we’ll jump into playing MP3 and WAV files, and even streaming internet radio! So, let’s get started!

Our very latest firmware, b177, adds I2S support to the Omega. Let’s go ahead and upgrade our OS. Please note, the upgrading process has to be done via either SSH or a Serial connection. Note that it will not work on the Terminal app on the Onion Console.

From the command line issue the following command:

Make sure to note that this is the latest release, and not the stable release. As such, proceed with caution!

Connecting to the Amp

Let’s wire everything up! We’ll need the following ingredients:

We’ll be connecting things together: 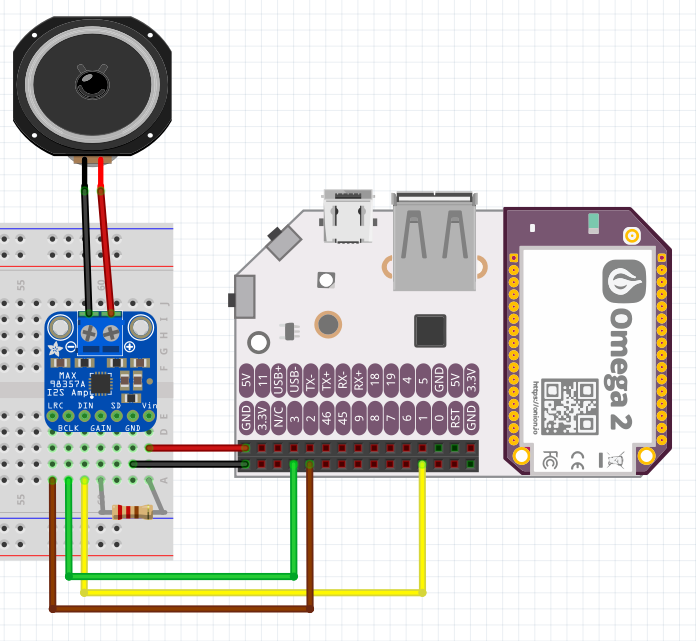 After your Omega is done updating, we’ll need to install some software to help us play music files:

Next, we’ll need to change the mux settings for GPIO 0-3 to switch them from regular GPIOs to I2S pins. To do so, run the following command:

And you’ll see the following output:

Now, we are all set and ready to play some tunes using your Omega2! To play a WAV file we’ll use the following command:

To play an MP3 file, issue the following command:

If you want to stop playback before the file is done, hit Ctrl+C.

For example, if you want to listen to an MP3 file, transfer it to your Omega and use mpg123 to play it:

You can also use mpg123 to stream internet radio! You will need the .m3u URL of the radio station that you want to play. For example, you can download the .m3u file from any internet radio web-site. We downloaded the file from here. Now, open the file using any text editor (e. g. notepad, vi), copy the link, and run the mpg123 command with the URL as the argument:

And here you have it! Now, you can listen to your favorite local and internet tunes using your Omega2!