Hey there!
Welcome back to 2-Bullet Tuesday, where we’ll share useful tips and awesome stuff sent in by Omega2 users all around the world. Check out creative projects and tutorials that will supercharge your IoT development!

This week, our favorite project is a tutorial on setting up websocket communication on the Omega2 by Nic Raboy. Having a websocket server on the Omega allows any client like a web browser, mobile app, or even a game to communicate with and send commands to your Omega!

Nic used Python and the Tornado websocket package to implement the websocket server. The tutorial outlines the steps required to install the necessary packages, provides the websocket server Python code, as well as a simple client side front-end in HTML & Javascript. With this code, a user can type a message into their browser, and it will be displayed on the Omega’s OLED Expansion.

This is an awesome starting point for any and all connected and/or real-time projects since it can be so easily adapted for your own purposes. Great tutorial, Nic!

For this week’s tip, we’re doing a quickstart tutorial for getting up and running with the Servo (PWM) Expansion. We’ll show you how to correctly connect servo-motors to the Expansion and then how to move them from the command line. 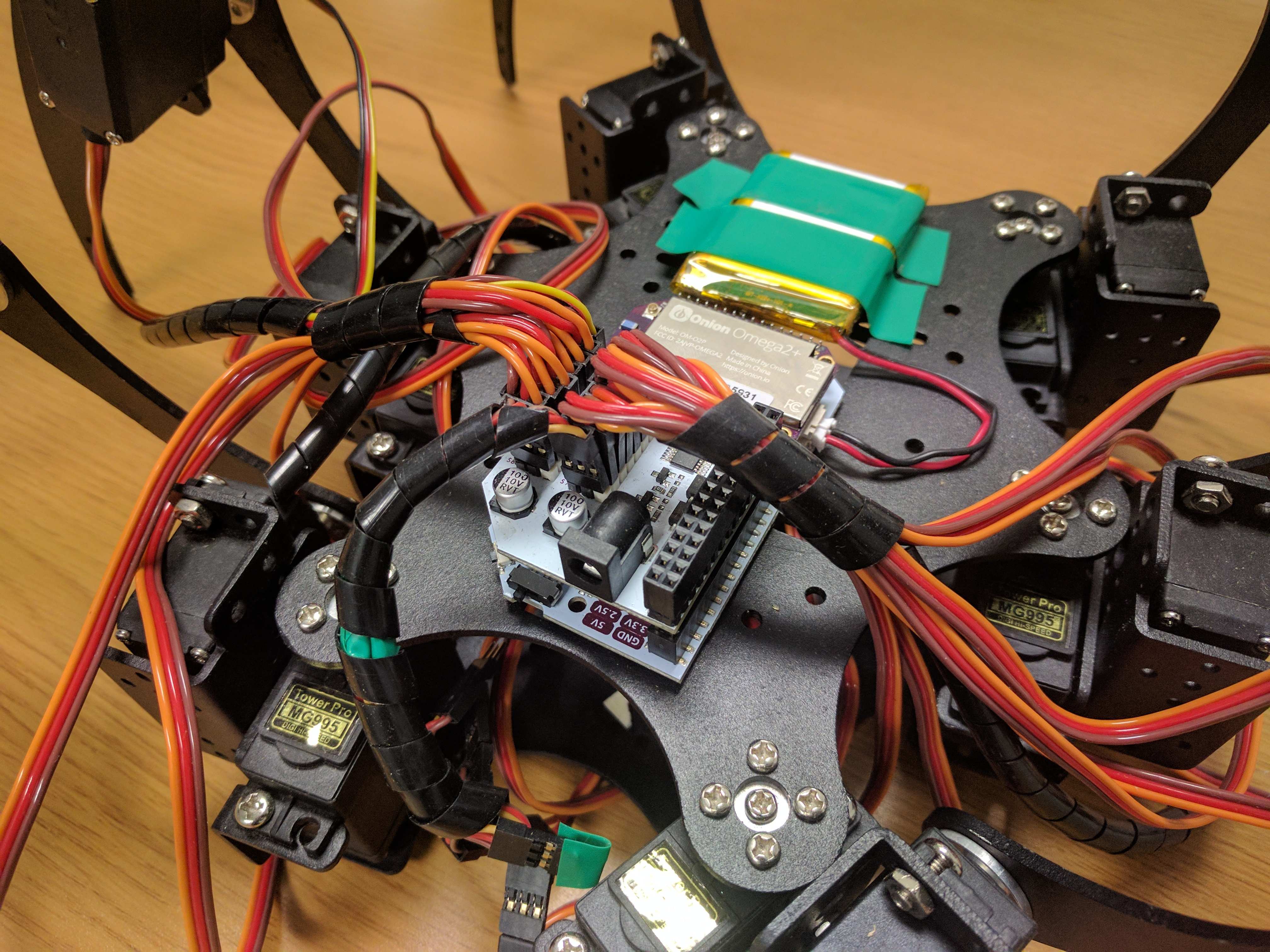 Why exactly is this called the Servo (PWM) Expansion? Glad you asked! Servo-motors are controlled with Pulse Width Modulated (PWM) signals. For a PWM signal, the duration of time the signal is “high” (logical 1) determines the pulse width. When a servo receives a PWM signal, it will set it’s angle according to the pulse width of the signal it receives, but more on that later.

The Servo Expansion can generate up to 16 PWM signals and has really handy headers for directly connecting servos. With the Servo Expansion, you can connect up to 16 servos and control them with your Omega, opening the door to some awesome robotics and automation projects!

Once you’ve connected your Servo (PWM) Expansion into a Dock that has the Expansion Header (so the Expansion Dock, Power Dock, or Arduino Dock 2), you can plug your servos directly into the Expansion. Servos generally come with a three-pin female connector with the following:

When connecting the servo, make sure you’re plugging in the connector the right way. The Signal wire of the servo connector must plug into the Signal pin with the white header block on the Expansion. If you briefly connect the servo backwards, it likely won’t result in any permanent damage but you’ll notice that you won’t be able to control the servo at all! 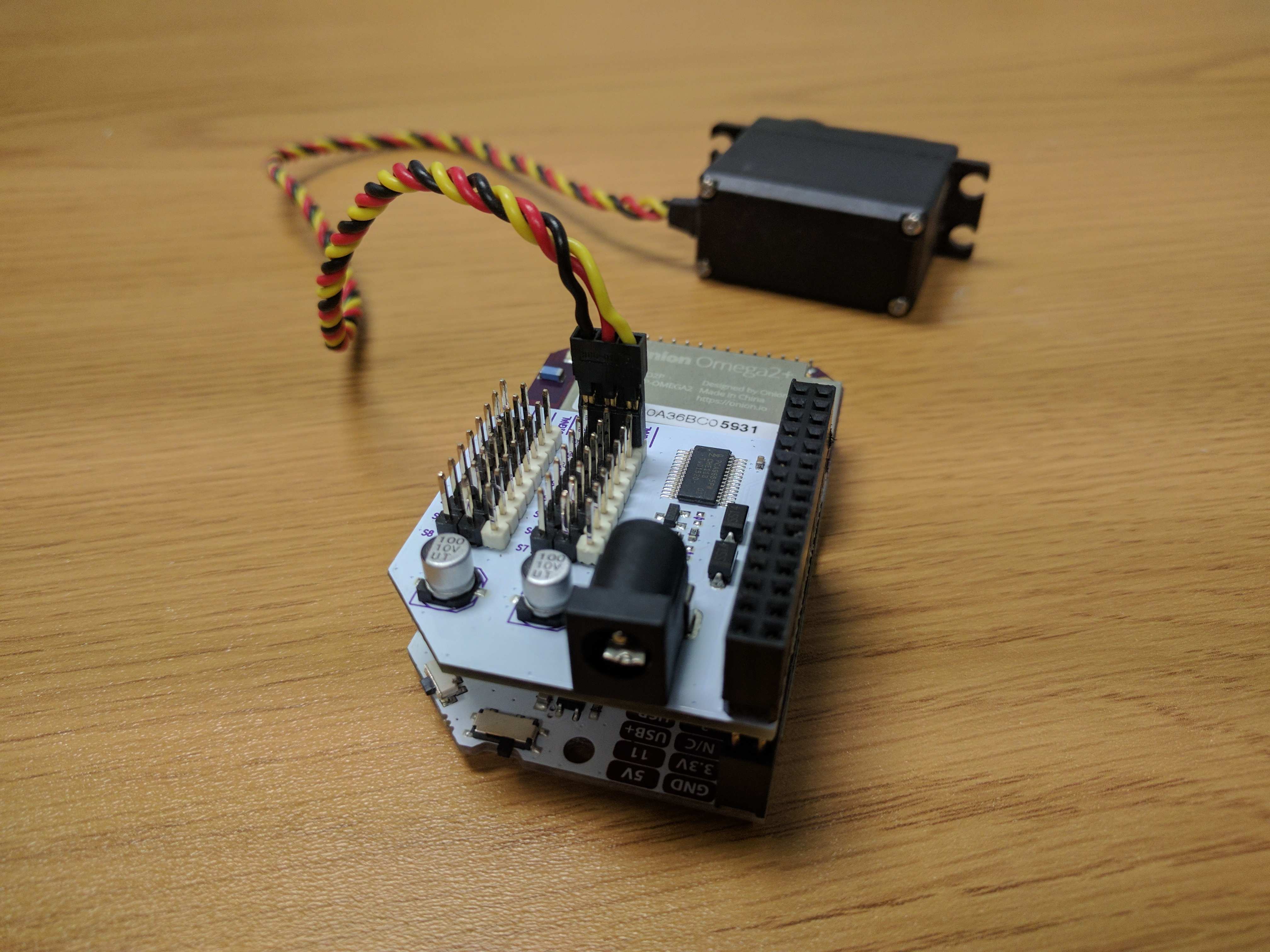 You’ll notice the Servo Expansion also has a DC Barrel Jack. Servos are DC motors that do mechanical work, often times with a load, meaning that they require significant current to get the job done. If you’re using one or two servos with a low load, you can probably get away with powering the servos directly from the Omega. When using multiple servos under a load, we recommend supplying the servos with their own DC power supply through the barrel jack. This will give the servos the current they need to get the job done!

Earlier we mentioned that the pulse width of a PWM signal controls the angle of a servo motor. Generally, servos manufacturers define pulse widths for:

For the visual learners out there: 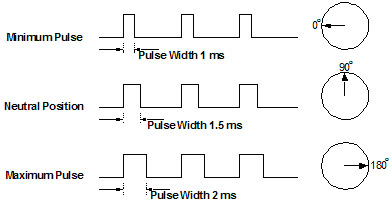 It’s important to note that there is no “standard” pulse width definition, so you should check your servo’s datasheet to find the minimum, neutral, and maximum pulse widths as well as the signal frequency.

Moving a Servo from the Command Line

Now that you have some background on how servos work, it’s time to have some fun!

Let’s say we’re using the servo described by the diagram above, that it requires signals with a frequency of 50Hz (meaning a period of 20ms), and that we’ve connected it to Channel 0 on the Servo Expansion. We’ll be using the pwm-exp command to control a servo from the Omega’s command line

To set your servo to the minimum angle, run:

You’ll notice it’s the second argument that controls the angle of the servo! While this command may seem a little daunting, it’s actually quite a breeze:

Alright! You now have a primer on how to connect servos and control them from the command line! Try it out yourself and then dazzle us with your servo-based projects!

All of the Tips!

Omega Tip Instead of a tip, we have some very exciting news: a brand new…

Without any further ado, we present the Onion Release Roadmap for the next couple of…