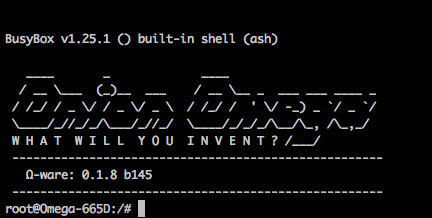 Transferring Files To and From the Omega using rsync

For Mac and Linux, we can use the command-line utility rsync (remote sync) to transfer files to and from the Omega. It’s included with Mac OS X and most Linux distributions by default (including the Omega). rsyncuses the ssh protocol when connecting to remote servers.

For Windows, there are 3rd party programs you can download that offer the same functionality as rsync. A quick Google search will return several results; try looking at some of the popular ones to see which one is right for your system.

The rsync command can be used to copy files over to a remote device like your Omega. However, if the files already exist then it takes a smarter approach to sending new data. It looks at the differences between the two sets of files, then applies the differences to the files to bring them up-to-date. This is faster than copying the entire files over and over again!

Copying Files to the Omega

To copy a file or entire directory to the Omega, the command looks like this:

Let’s try some examples. Connect an Omega to your wireless or wired network, then on your own computer run the following commands. Replace Omega-CB07.local with your own Omega’s name or IP:

Then login to your Omega and look inside the ~ directory:

We uploaded a dummy file to show you how this works, but what if this were an actual code file that you wanted to update? To see how updating works, we’re going to add some text to a file we uploaded previously, then we’ll upload it again. Return to your own computer and enter the following:

Now check the file on the Omega:

And voila, the file now has our updates! When you’re working on a project, you can write a shell script that uses these commands to update files on the Omega from the comfort of your own computer.

There are three ways we can copy the files to the Omega. Let’s explore them by creating a test directory with some dummy files on your computer.

On your own computer, create a folder called myDirectory that contains some files called file1.txt and file2.txt using this command:

1. To copy the entire directory to the Omega, type the local directory name without a slash at the end when running the command like so:

Verify this on your Omega by navigating to the ~ directory:

2. To copy only the files inside a directory, add a slash / to the end of the local directory name like so:

Now check your Omega again and notice the difference:

This time, only file1.txt and file2.txt were uploaded!

3. To copy files from a local directory to a new (renamed) directory on the Omega, type the name of the new directory at the end of the remote path like so:

Check it on your Omega:

Pulling Files From the Omega

The commands for downloading files from the Omega work exactly the same way, except you need to switch around the local and remote directories.

Try this out by creating a file on your Omega:

Now on your computer, run the following:

The . means “the current directory”, or whichever directory your terminal has open at the moment.

If you run ls, you’ll now see the new pulledFile.txt that was downloaded from your Omega. Run cat on the file to see the message we wrote earlier:

The same syntax for copying entire directories and files as well as copying directories to renamed ones also applies to downloading as shown in the sections above.

And that’s it! For more info on transferring files to and from the Omega, check out our guide in our documentation.
Let us know what kind of stuff you would like to see featured on 2-Bullet Tuesday! Send a tweet to @OnionIoT with your suggestions!

Thanks for reading! Have a great week!

P.S. — Our Omega2 Indiegogo campaign will be ending in the near future! Don’t miss your chance to get the Omega2 for just $5!

P.P.S — We’re shipping packages on a daily basis! If you haven’t gotten yours yet, sit tight!

Hi there! Welcome back to 2-Bullet Tuesday, where we’ll share useful tips and awesome stuff…