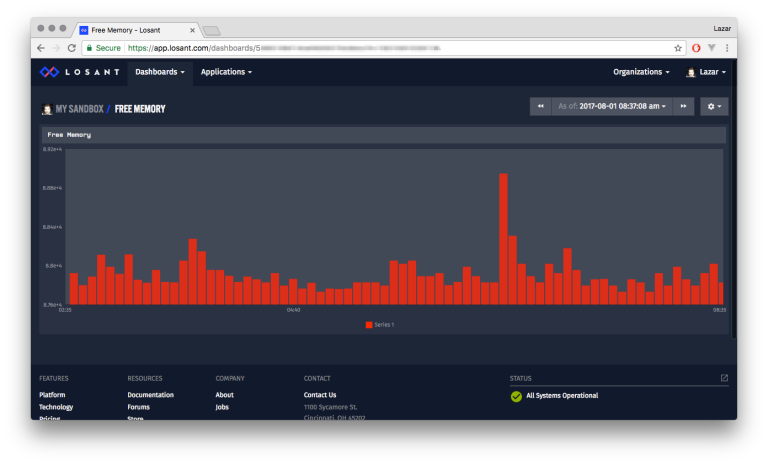 Last week we covered how to connect your Omega to the Losant Cloud Platform with a single command, so this week we’ll be showing you the next step: how to easily send data collected by your Omega up to Losant so you can make full use of their awesome platform.

The setup process from last week configures a Mosquitto MQTT bridge to Losant. Now we’ll use Mosquitto to send data points to Losant by publishing to your Losant device’s state topic. The command will look something like:

The command might seem intimidating at first, but it’s not too bad when we break it down into chunks:

Typing out JSON strings gets a little tedious so we’ve made a script to collect data and generate the JSON for us to make this process easier.

Let’s first grab the script. It’s available on GitHub so we can quickly grab it with:

For this Losant device, we’re collecting the amount of free memory on the Omega’s filesystem, so to follow along, you will need a Losant device with a number attribute named freeMemory. Later on we’ll cover how to customize the script for your needs.

So instead of writing out the JSON string by hand ourselves, the script will:

And that’s that! With this one command, we can send data up to Losant to be tracked or part of a larger workflow.

Tracking and visualizing time-series data is one of the strengths of the Losant platform, so it follows that we’ll want to send data points at a regular interval. We’ll use our good friend the cron daemon to schedule our mosquitto_pub command to run every so often.

First, run crontab -e to open the scheduling file, then add the following:

Close and save the file by hitting escape and then :wq. Then restart cron for the changes to take effect by running /etc/init.d/cron restart.

Your Omega will now be reporting it’s free memory to Losant once every five minutes. For more details on scheduling jobs and commands, check out our Documentation Article on the cron daemon.

Sending your Own Data

The send.sh script we used above is written to acquire and JSON format the amount of free memory for demonstrative purposes. You might want to collect sensor measurements, GPIO values, or a variety of other things, so feel free to use the send.sh script as a starting point.

Use the addFreeMem() function as a template: it should acquire the data you would like to measure and then add it to the JSON object. There are several functions that can be used to add name-value pairs based on the type of the data:

The functions are all to be used as follows:

If you’re unsure, take a look at the script and look for the comments with YOUR TURN, they indicate what needs to be done.
Happy data collection!