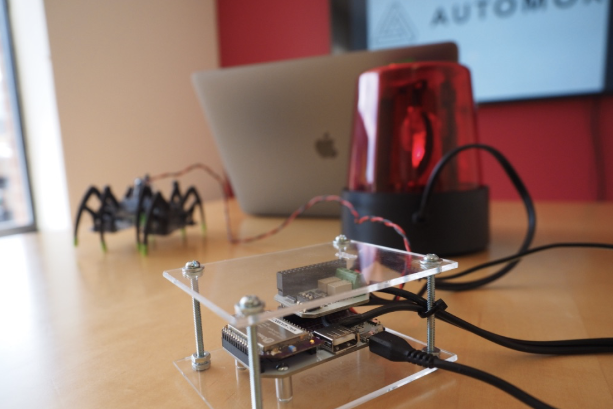 Hi again to you all, and welcome to this week’s project and yet another great example of taking data from the net and making it come to life in our world with real positive effects.

This project takes an online alert into the real world by metaphorically slapping you on the knee – in this case by turning on a police beacon – anytime you get a sufficiently important alert.

Sometimes missing that one alert amongst them all, whether it be a call to action or an especially important notification, can lead to some catastrophic real-world consequences. The fact that we get so many alerts leads to Alert Fatigue which is certainly on the rise, and makes this scenario all-the-more likely to happen. Having a physical real-world alert that’s triggered from data online can help avoid this, and knowing it’s there ready to burst into life at the first sign of potential problems can be a real stress reliever.

In this project from Joe McManus of Automox, data from the internet is grabbed from an Automox API to analyse and track how many servers require critical patches. If that number goes over a pre-defined threshold the Omega will trigger a real-world event, in this case a police beacon will start flashing and a robot spider will take a walk across Joe’s desk. Pretty awesome and very hard to miss!

The Omega grabs data from the online Automox API for analysis and takes certain actions depending on the number of patches required. The current status can be viewed on the OLED Expansion at any time and when the number of updates goes over the threshold, the Relay Expansion triggers the Police Beacon to come on and flash for 30 seconds and then turn off again. Of course these settings are user defined, as is the selection of the physical device you want triggered. The project is written in Python3 and we had a recent article on updates to our modules to Python3, for those that may have missed it check it out, there’s a whole lot of useful improvements. 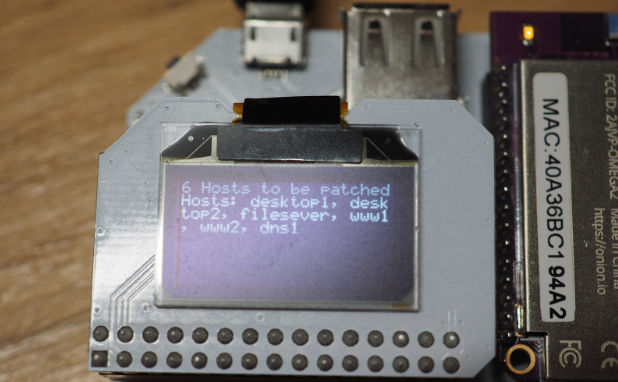 Joe was able to quickly put this project together with the Omega thanks to the modularity of the Omega Expansions and the fact that it supports Python. The physically modular Expansions allowed Joe to add real-world functionality -controlling external appliances and displaying the latest data from the API – just by plugging in the Expansions. With Python, Joe was able to leverage the  readability and ease of programming it offers to quickly prototype an IoT system.

This project really helps in fighting the ever-growing problem of alert fatigue, and it’s another great example of IoT devices using data from the internet to make things happen in the real world – saving us time, money, or both!

Joe has used this project to start combatting these issues in his work-place, and we’d love to hear from you if you’ve decided to implement this at work also. Feel free to drop us an email or tweet @OnionIoT.

Omega Tip This week, we'll be going further with the Servo Expansion by writing a…